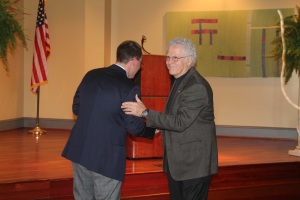 It was such an honor to be introduced by Homer Hickam.

The book launch for The Professor took place on Thursday, January 30, 2014 at the Huntsville Museum of Art in my hometown of Huntsville, Alabama.  It was an unbelievable night, as Barnes & Noble sold out of books.  All total, 273 copies of The Professor were sold, and thirteen of those were pre-paid after there were no books left in any of the boxes.

I could not have dreamed this night any better!  There were approximately 200 people in attendance, and I was overwhelmed by the turnout and the outpouring of support for the event.  My beautiful and wonderful wife, Dixie, was the point guard for the launch, handling the flowers, tablecloths, drinks, food, etc., and she did an incredible job with assistance from some wonderful friends and family, including Amy Brooks, Bill and Melanie Fowler and my sister in law, Christi League.  We were blessed to have Maggie Clark with Barnes & Noble in attendance to sell the books, and my rock star publicist, Julie Schoerke from JKS Communications, was on hand to make sure that I spelled everyone’s name correctly and kept the lines moving.  Though not in attendance, the night could not have happened without my incredible agent, Liza Fleissig of the Liza Royce Agency, who created the invitations and was the driving force behind so much of the night’s success.  Also, we had tremendous support from Mike Underwood, Bryon Quertermous, Caroline Lambe and all the great folks at Exhibit A Books.  Additionally, my law firm, Lanier Ford Shaver & Payne, provided great support for the event, and it was nice to see so many of my partners, colleagues and staff at the launch.  Finally, it was my great privilege to partner in this event with the Madison County Volunteer Lawyers Program (“MCVLP”), and a portion of all 273 books sold will go to the MCVLP.

My wife Dixie smiles in the crowd.

In addition to my wife, Dixie, I was blessed to have much of my family in attendance, including my Mom and Dad (Beth and Randy Bailey), my sons Jimmy (9) and Bobby (8), my brother Bo, his wife Amy and daughter Marybella, my sister in law, Christi League, her husband Will and daughter Bentley, my sister in law, Denise Burroughs, her husband Jeff and daughters Libby and Kacy, my father in law Dr. Jim Davis, who makes a cameo in The Professor, along with his wife Janie, and my mother in law, Beverly Baca, and her husband, Jerry. Also, my best friend from law school, Will Powell, who was the inspiration for the character of “Powell Conrad” in The Professor, drove the 90 minutes from Florence to be there, and he was accompanied by his lovely wife Emily.

Me and Will Powell, the inspiration for “Powell Conrad”

The night was capped off by a brilliant introduction from Huntsville’s own Homer Hickam, bestselling author of Rocket Boys (made into the movie October Sky).  Homer gave an elegant and dynamic speech, which kept the audience spell bound and was a very tough act to follow.  Homer and his fantastic wife, Linda, are two of the nicest people I have ever had the privilege of meeting, and their presence made this night unforgettable.  After Homer’s introduction, I spoke for a few minutes, concluding with a short reading of one of my favorite passages in the novel.

All in all, it was a fantastic night, and a great start to our book tour for The Professor!

Signing books while my sons Jimmy and Bobby look on. 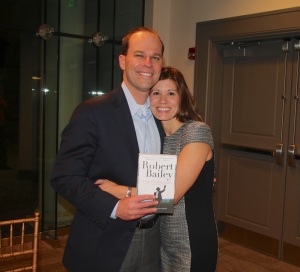 Me and Dixie after the Launch. 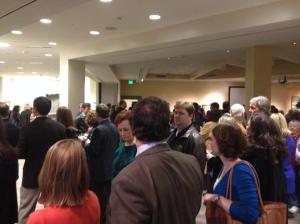 We had such a great turnout!

Look at the line! 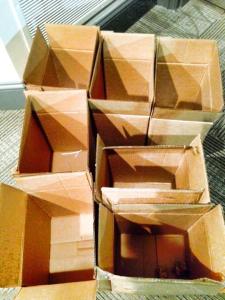